Next we have a table of  Spanish numbers with audio to 100, and with the numbers written up to 2 million.

Learn Your Phone Number in Spanish

Spanish Days of the Week

Spanish Months of the Year

If you like this page, please try our free Spanish lesson by clicking on the flag below.

Hits for Remembering the Spanish Numbers

Here are some hits for remembering some of the Spanish numbers that will help some people. Remember that these notes are intended to be useful to you as a learner. Sometimes it just as simple to use our memorization tool at the top of the page to drill these numbers into your memory.

this may help you get the connection right.

Strange and illogical pictures can help you remember things like this, so try picturing your favorite Zorro hero accidentally marking a “cero” instead of his trademark Z and then being very upset about his mistake. 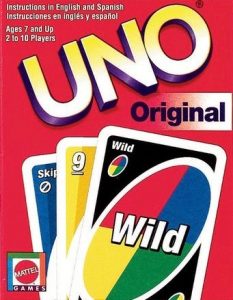 The Spanish number for one is “uno.” That is also the name of this popular card game.

One: The Spanish word for the number 1 is uno. This word first brought into wide use in English as the name of a popular card game sold called Uno. If you’ve ever played this game, you should instantly be able to remember that it is the Spanish word for 1.

Two: The Spanish word for the number 2 is dos. When I don’t have any good examples for words like this, I try to remember them by making very strange images in my mind that try to represent the sounds with strange images. The stranger they are, or the more naughty that they are, the better they work.

In English, female deer are called doe. If you are talking about more than one of them they are called does. So imagine two does in the kitchen wearing white bakers smocks and making bread dough.

Three: The Spanish word for the number 3, is tres. Imagine a huge train wearing a woman’s dress and put the “tr” from train in front of the “ress” sound from the dress and you get the idea. Remember the stranger your images, the better they work.

The Spanish word for 4 is cuatro, and the name for this four wheel drive car is Quattro.

Four: The Spanish word for the number 4 is cuatro. Would it help you to remember this

Five: The Spanish word for the number 5 is cinco. This word has become well know in American usage as part of the name of the Mexican and Mexican American holiday held on the fifth of May called obviously in Spanish “Cinco de Mayo”.

If that doesn’t help you for some reason, try visualizing an animated kitchen sink hoeing five weeds in a vegetable garden. Put sink together with hoe and you have – cinco.

Six: The Spanish word for the number six is seis. If you combine the sound that starts the English word “say” with the sound that ends the word “ace”, your pronunciation would be about right. So imagine a big animated six-shooter gun, the gun is wearing a top hat walking into an animated western bar and the gun is stuttering while trying to say that he’s an ace – seis.

Seven: The Spanish word for the number seven is siete. To get the pronunciation of this more or less right, start with the English word “see” then add the sound for the last part of the word “get”and then the last part of the word “pay.” Saying this correctly requires opening your mouth into positions that are not standard in English, so listen to this, open your mouth, get help from a teacher and look in a mirror to get it right.

To remember siete, try a sea (the kind with water) it’s one of the seven seas (a phrase for all the world’s oceans) and it’s become an animated monster and it’s walking up to GET it’s PAY at a bank.

Eight: The Spanish word for the number eight is ocho. To get the pronunciation close to right, start by the English word oh, as in “Oh my!” only purse your lips into a tight O. The next sound is a ch sound as in the name Charles and then another short O. Try saying the English word “ouch” as if someone had pinched you followed by a short oh. Then change the first vowel of ouch to oh as if you were saying oh ch oh.

I’m trying to explain how to piece these Spanish words together from parts of English words, because that can help you remember the Spanish word more easily.

To remember ocho, try visualizing yourself stomping on the toe of the Jolly Green Giant. He says “ouch, and then puffs of smoke come out of his nose in the shape of O’s” Ouch- oh,  >> ocho. Okay that’s not great, but it could work.

Nine: The Spanish word for the number nine is nueve. The pronunciation is sort of vaguely close to saying the English words new >> wave >> ah only fast and all together. To visualize it, imagine Buzz Light Year from “Toy Story” and he’s carving the word “new” in the Hollywood walk of fame while a tidal wave of umbrellas washes down the street. Remember the stranger they are, the better they work.

Ten: The Spanish word for the number ten is diez. To say this and get in the right ballpark with the pronunciation, try adding the sound de as in the English word department to the word ace only close your mouth as you say the last part of the word ace.

You probably know that the English word diety means “a god” and you may know that Dios in Spanish means a supreme god. So you have a diety (a god)>> Dios (supreme God) >> diez (the number 10). You probably know about the Ten Commandments as being handed down by God. I’m certainly not certain that these words are etymologically related, but if it works as a memory crutch, it’s a good thing.

To visualize this imagine showing your grade school report card to God Almighty (in all his fury as you imagine him) and you have 10 D’s (bad grades) and God says, “D’s you should have A”s” >> diez.

Hint for Remembering the Number 40

The Spanish number for forty (cuarenta) is a lot easier to remember if you can remember that it sounds a lot like the English word quarantine.

A quarantine is a long period (perhaps 40 days) when you have to stay in isolation to make sure that you don’t give someone a bad disease that you might have. So try to remember a forty day quarantine >> cuarenta >> 40.

If you like this page you can continue improving your Spanish with our free Spanish lesson. Click on the flag below to keep learning.

Some of you have other good ideas for learning the Spanish numbers.  Please share your suggestions below so everyone can benefit.