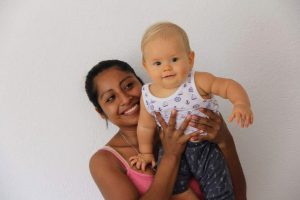 I think I know why you’re here. You had a baby — and then you had feelings that you never would have imagined. And today, you want this wonderful child to learn a foreign language. Right?

School language programs in the USA have an almost 100% failure rate to produce high school graduates who can competently use the languages they have studied.

Taking your children to France once for two weeks in the summer so your children can learn French won’t work either.  For immersion to be effective, your son or daughter, needs a lot more time than two weeks.  What would work is to spend three months every summer in Paris and a month in the French Alps during the holiday season.

My brother speaks Spanish well.  He speaks it well enough to use it daily in his work as a physical therapist.  He would like his two daughters to learn Spanish.  His method of teaching them Spanish has been to tell stories (mostly in English) and then plug in an occasional Spanish word.  The result is that his daughters know about 100 words in Spanish, but they can’t say, “What’s your name?” or “Where is the bathroom?”

All language learning systems that do not teach the learners complete useful phrases fail.  No exceptions.

My brother is a great example of the many people who are competent in a language but have no idea how to teach it.

Most Spanish for Kids Programs are Useless 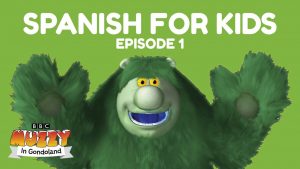 BBC Muzzy Spanish is one of the many useless programs for learning Spanish out there.

Imagine how easy it would be to sell Spanish learning programs to parents who don’t speak any Spanish? It’s impossible to tell if the program is good or not and all the parent can really tell is whether there is some Spanish in the program. Almost all of the programs that you buy are a 100% waste of money.

Grammar Training by Itself Doesn’t Work

Many language learning programs have such a strong focus on grammar that they might as well be 100% grammar.  This doesn’t mean that there isn’t some value in having your child learn some grammar, but wait until your he or she is conversational in the new language before studying grammar.

Don’t waste your daughter’s time and your money on once per week tutoring.  One tutoring session per week isn’t nearly enough to yield effective results.

Tutoring is a slow language learning method, but it definitely can work and it should be part of your learning plan even if you or your child is also using effective learning software like Language101.com!

However tutoring should ideally be done for two hours per day seven days per week with one hour per day, five days per week, being a minimum below which, you simply shouldn’t bother.

This absolutely will work for children between the ages of 6 months and 6 years. It certainly could work for older children too, but you need to be 100% sure that the nanny has the personality of a teacher.

If you can, it would be nice if your Spanish speaking nanny has an educated accent from some place like Mexico City or Bogota Columbia. Having said that, having an imperfect accent in a language you speak well is still a very good thing. If you find a great nanny with a regional accent in her Spanish from some small town in Mexico, hire her anyway.

You may want to record a sample of your prospective nanny’s voice in Spanish and then have another native speaker of Spanish check her accent and tell you if it’s good enough or not.

Music and Movies Will Help

Watching Enough Stories on Television Will Work for Some Children

I’m not a big fan of having children watch television, but so many of you are going to do it anyway, that I might as well tell you how to have it be an effective learning method for your children.

Starting from Age 6 months and up to about 6 years, many children have learned languages effectively by watching a LOT of children’s television in their new language.

Ideally you should find shows produced in Spanish for example, rather than American English shows dubbed in Spanish.

I’ve watched the video below, “The Gingerbread Man” at least a hundred times and I have now had our Spanish teachers turn it into two lessons on our web site with both good and literal translations.

Your children need to be watching this for several hours per day. If the stories are simple enough, translation and subtitles probably aren’t necessary. Humans are hard wired to learn stories and videos about fairy tales and similar stores are easy to understand even if you don’t know the words.

Switch Your Socializing to Your Son’s New Language

Say for example that your son wants to learn Spanish.  If you are religious, switch to a Spanish church.  If you aren’t religious, join secular organizations for Spanish speakers.  If your son makes friends in his new language he is much more likely to learn it well.

This can work, if your child is motivated and likes it.  There are some very good French immersion programs in the English speaking parts of Canada.  People who stay in these schools until they graduate, come out speaking pretty good French.  They have a strange accent, but they completely master French.

Remember That It’s Learning Minus Forgetting That Counts

Your daughter will forget everything that she doesn’t use.  So remember that you need a method of fast review to retain the knowledge for a lifetime.  Language101.com has a fast review method like this.  So when your daughter forgets, and she will forget if she doesn’t continue to use it, she can quickly re-learn what she has forgotten.

This absolutely works 100% of the time.  For example, if a father only talks English to his son, while his mother only talks to him in Spanish, the boy will speak two languages with native proficiency.

If the parent teaching the second language is NOT a native speaker, don’t worry about your daughter picking up a bad accent from you.  Children will always adopt the accent of other children when they have the opportunity to play with other children.

If you have a baby who isn’t talking yet, you may want to learn the language yourself and teach it to her when the right time comes.

Language101.com Can Help Children Who Can Read Well

If your son is old enough to read and understand a newspaper, then Language101.com can be part of his language learning plan.  Make sure he watches and understands the video directions and the interactive instructions.  Also make sure he studies fast.

I want to stress that your son will need more than Language101.com to become proficient.  He will need practice with native speakers that is fun for him.  Your job as a parent is to arrange pleasant interactions for him in his new language.

If your boy isn’t old enough to read English well, then Language101.com is not a good choice for him.

Learn the Language First and Then Teach it to Your Children.

It definitely is possible to learn a language that you do not now know and then teach it to your children. I’ve met at least two people in Ukraine and a few in Mexico whose parents talked to them in English from a very early age and they grew up bi-lingual.

Learning a language first, and then teaching it to your children, can work.

Have Your Child Try Our Free Demo

If your daughter or son is old enough to read English well and if she or he is old enough so that studying on a computer for 30 minutes would be a good experience, then you can also have your child try our free demo without interruptions for 30 minutes.  See how much your child can remember after the lesson and then the next day.

If they like the free demo and remember what they learned, then our program is right for you.