How To Learn a Perfect American or British Accent

(Or at Least Dramatically Improve Your Accent) 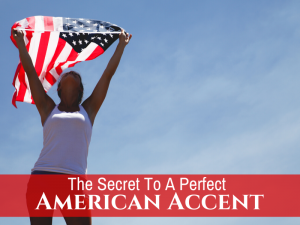 When I was traveling in Ukraine,  I met a man who I thought was an American when I first talked to him.

He spoke perfect English and his accent was perfect, too. He had a huge vocabulary and could understand complex, fast speech with ease. I really thought he was an American with a good university education. But he wasn’t.

He was a Ukrainian who had never traveled outside of Ukraine. So, how had he learned to speak with a perfect American accent?

He had listened to National Public Radio (NPR) and read the transcripts at the same time. When he didn’t know what something meant, he would sometimes look up a few words, but, most of the time, he would just guess. After time, his guesses got better until, eventually, he was understanding everything.

He spent an hour every day listening to NPR and reading the transcripts and, every day, his vocabulary got bigger. Note that this needs to be active listening and reading while trying to understand as much as you can. Simply having NPR on in the background can’t hurt, but it won’t help you as much.

Why You Should Copy NPR’s Professional Broadcasters

The people who read and report the news at NPR were hired for those jobs because they have the nicest voices of anyone in the United States. Plus, they are smart, well-educated, and very well spoken. They are the perfect voices to copy rather than some random teacher you may have.

Where to Find NPR Stories With Transcripts.

If you just go to the main NPR site, NPR.org, it will be very difficult to find shows with transcripts. The reason for this is that the transcripts are accurately and carefully done by hand, not automatically generated. It takes about a week for them to get them posted online.

The most popular show on NPR is a morning news show called Morning Edition. You should to go to the Morning Edition archives and pick any show from a month in the past. Then, look to the right for alternating long and short bars, which indicates it has a transcript.

Once you have found shows that have transcripts (not all NPR shows have transcripts), you can listen and read along at the same time. Your accent will get slightly better every day.

Listen to these professional voices as much as you can. While, in my experience, listening without reading is much less effective than listening while reading, it still is worth just listening if you are paying attention.

Listen to these perfect voices as much as you can.

If you don’t already have one you like installed, install a plugin like Transover for Chrome that lets you instantly translate any word from English into your native language.

This is also a surprisingly fast way to learn new words. I find that when I am studying Spanish, my comprehension goes way up when I both listen and read at the same time.

Check Your Vocabulary Size Before You Start Studying This Way 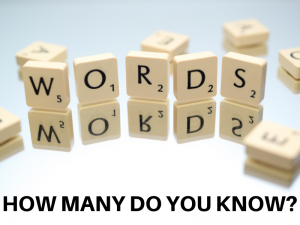 Most people have no idea how many words they know in English (or any other language for that matter). Until recently, there has been no easy way to know or even estimate how many words you know.

Fortunately, some smart people figured out how to make a three minute test that will tell you how many words you know in English. It’s based on a word frequency list.

You simply mark all the words you know on two short pages, press the button and get an instant, reasonably accurate estimate of how many words you know.

After you have clicked or tapped on all the words you know, you can either answer some research questions to help the people out who made the site, or skip them for a faster answer.

The site is called Testyourvocab.com. I recommend testing your vocabulary size now and then again after you have been studying with this method for a month.

Use this Old KGB Spy Trick to Reduce Your Accent

Other people will have to work harder at correcting their accents.

The big problem with reducing any foreign, regional, or ethnic accent is that you don’t really sound the way you think you sound. It’s also very common to be unable to hear and perceive the difference between what you are actually saying and what you should be saying.

I met a Russian man who told me that the KGB used to train spies to have perfect American accents by using multi track audio recordings.

What is Multi Track Audio Recording?

This lets the person who is producing the song adjust the volume of each instrument separately to get the perfect overall sound that he is trying to get.

There are lots of good multi track audio recording programs, but the one that I like and use is called Audacity – and it’s free. So to reduce your accent even further, install Audacity. 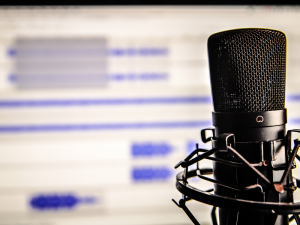 Recording yourself over a recording of an NPR host allows you to listen and compare your accent.

Now that you have Audacity installed, go back to NPR and find either the perfect man’s voice or the perfect woman’s voice that matches the natural pitch of your voice as closely as possible.

We have posted four perfect samples of different range voices below for you to listen and download.

You can also download a clip from NPR (they make this easy) and then import it into Audacity as your first track. Use the editing features of audacity to trim off and throw away everything but about 15 seconds of the perfect voice.

Now, play this 15 second clip over and over again, trying to say exactly what the NPR host says in exactly the same way. Try to copy everything about the voice that you can.

After you have done this several times, put on your headphones and listen to the NPR host say this phrase, while you record yourself saying the same phrase.

Then, go back and turn off the NPR host and listen to how you said the phrase. Once you’ve done all this, delete the first recording you made, go back through the steps, and try to get it better.

Samples of Perfect Voices from NPR

Here are some short samples that you can use from NPR with the perfect voices:

In 1993, journalist Alex Wagner, then a teenager, saw something familiar on the cover of Time magazine – a computer generated picture of a multiethnic woman who kind of looked like her. Wagner’s father was white. He was from the Midwest. Her mother is from Burma. And after reading that Time magazine story on the new face of America, Wagner decided to embrace her identity as a so-called futureface.

Tricia Morrow is a global safety engineer at General Motors. She says their first approach was to use sensors that could detect a child or pet left in the back seat, but they just didn’t work very well. So they went back to basics.

Let’s learn about the guy who was on the other end of that phone call, the call where President Trump asked for a favor, a favor from the president of Ukraine, Volodymyr Zelenskiy. If there were ever a person stuck in a place he never wanted to be, it’s him.

Well, he’s being described as someone who provided a wealth of inside information to the CIA for many years. And this includes details on how President Vladimir Putin and the Kremlin interfered in the 2016 U.S. presidential campaign. Now, CNN reported this story first. The New York Times has followed with some additional details. A key one – it says the CIA initially wanted to pull the spy out in late 2016, but the spy refused – wanted to stay in Russia at that point. Then the CIA pressed him again in 2017, and he agreed to leave with his family.

If you want a perfect British accent, you need to do the same basic thing, but instead of listening to NPR you want to listen to BBC programs with transcripts. It’s important to note that you should listen to BBC news and educational programs where the hosts of the show will be using perfect educated accents.

The BBC carries a lot of shows where the actors are using strong regional accents. These are always considered low class and while you need to learn to understand the, you shouldn’t copy them.

So here’s a link to the list of BBC shows that have transcripts. They don’t really make this easy to find, but if you look around, you can figure out how to both listen to a show you like and read the accurate transcript at the same time.

The BBC has a lot of materials that they publish that are specifically for the purpose of learning English. I’m not a big fan of their programs, but I do think there is a lot of value in listening and reading at the same time.

What Russians Should Do to Improve Their Accents

What Spanish Speakers Should Do to Improve Their Accents

Spanish speakers need to close their mouth about half way to significantly improve their accent in English. They should also relax their mouth more on words that end in either “O” or “A” and not pronounce these vowels so clearly.

If you are trying to learn a British English accent, then obviously you will use samples from the BBC instead of NPR.

A Live Coach Can Help a Lot

If you are listening to NPR every day and recording your voice while trying to match the professional voice, you will make progress with your accent and with your overall proficiency with English.

But, like learning to play a new sport, having a coach can really help. If you can work with someone either in person or with a good video connection, the advice they give you can dramatically (and sometimes very quickly) improve your accent.

Your Mouth Should Get Sore

As you learn to speak English with a perfect American accent, you will be using some muscles that you haven’t used since you were a baby. This will make them sore. This is normal and a very good thing. If your mouth doesn’t get sore the first few times you try this, then you may not be doing it right.

This Works for Regional and Ethnic Accents, Too

These techniques will also help people who are trying to get rid of a strong regional or ethnic accent. If you have a very strong, southern accent and you don’t want to talk that way any more, this will work. If you have a strong, black accent and you want to sound more like a professional, educated broadcaster, you can use these techniques to learn the accent that you want to learn.

Here’s a Video from an Accent Reduction Coach

The key points below begin at 3:45