Even if you don’t live in Canada!

Canadians, and visitors to Canada, know that products sold in Canada have to be labeled in both English and French. It’s one of the things that Canadian customs checks for when products cross the border. 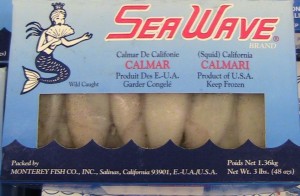 This box of frozen squid, at a supermarket in Hawaii is labeled in English and French.

If you live in Canada, turn every trip to the supermarket into a chance to learn a few new French words.

If you live in the United States, turn every trip to the supermarket into a search for products labeled in both English and French. You will find them!

When you find one, compare the labels and learn to read the French words.

Make it a game!

You’ll turn your shopping time into French study time. What a deal!

Brent is an engineer . . . and a world traveler. When he’s not traveling the world, he’s busy making software to help people Learn Canadian French and other languages.