How to Learn Japanese at Language101.com 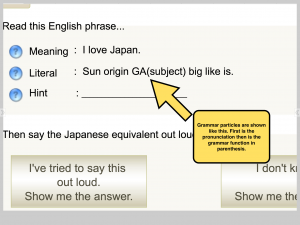 The meanings of hints and explanations in the lessons

In the Japanese lessons, there are a number of explanatory notes to help students. Japanese grammar is quite different than that of English. There are some things that have no equivalent in English, so a creative workaround was necessary.

The most obvious and frequent would be the particles. (For a more detailed explanation please refer to the article, “Particles.”)

Because there is no translation for these, the romanization of the particle is given. These include WA, GA, KA, YO and a few others. These are written as they would be said in English, not in the official romanization system used by Japan. 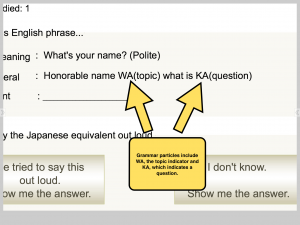 Next to the particle, in parenthesis, the grammar function of that particle is given. For example: KA(subject). In this case, the word preceding the KA is the subject of the sentence.

Other explanations in parenthesis simply indicate things like polite speech, or things that are only spoken by staff members, clerks, servers, etc. 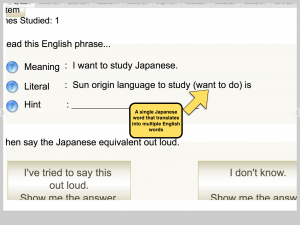 If you have studied other languages here at language101.com, you may notice that the Japanese lessons are styled a little differently. The formatting for the Indo-European languages does not work very well for eastern languages, especially Japanese, which is related to no other modern language.

Where to begin
Start your study with the “Introduction to Japanese” lessons. Also, it would be very useful to study the hiragana/katakana lesson to familiarize yourself with basic Japanese script.